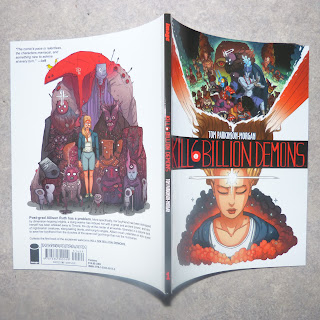 Post-grad Allison Ruth has a problem. More specifically, her boyfriend has been kidnapped by dimension-hopping knights, a dying warrior has imbued her with a great and ancient power, and she herself has been whisked away to Throne, the city at the center of all worlds. Stranded in a bizarre land of nightmarish creatures, slang-talking devils, and kung-fu angels, Allison must undertake an epic quest to save her boyfriend from the clutches of the seven evil god-kings that rule the multiverse.

I am a strong supporter of the original version. I always preferred to see, read an unretouched work. Well, in this particular case that's not true. Clearly, I do not have the level in English to be able to understand everything. Indeed, the demons / gods / mystical entities in this book each have a language that is derived from the classical English, and it took me a lot of concentration to read some of these languages. Once is not custom, I think the French version would be much more readable for me, and I will try to find it because it looks great, the drawing is very good, the story looks stupid but is well done and very well built. I liked it, even though the reading comfort was not really there.