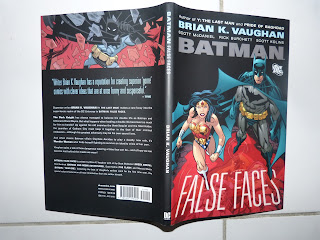 The Dark Knight has always managed to balance his double life as Batman and billionaire Bruce Wayne. But what happens when leading a double life becomes too much for him to handle? Up against his old enemies the Ventriloquist and the Mad Hatter, the guardian of Gotham City must keep it together in the face of their criminal endeavors... although his greatest adversary may be his own secret lives. And when classic Batman villain Clayface decides to play a deadly new role, it’s Wonder Woman who finds herself fighting to survive an identity crisis of her own.

That’s a pretty good book. The first story is really, really great, as the story than the drawing, it’s really cool how Batman have a personality disorder, that makes him more human and much more dark, I love it. Then there’s the Mad hatter story which is cool too. It could have been an animated adventure that it would have been better (if you can’t understand my English, I’m sorry, I’ll try to rephrase it). And finally the Wonder Woman story. Here the drawing is really beautiful, but the story seems a bit easy to me, that’s a shame, but it still is a good entertainment.
Publié par Docteur Zack à 07:00 Aucun commentaire: